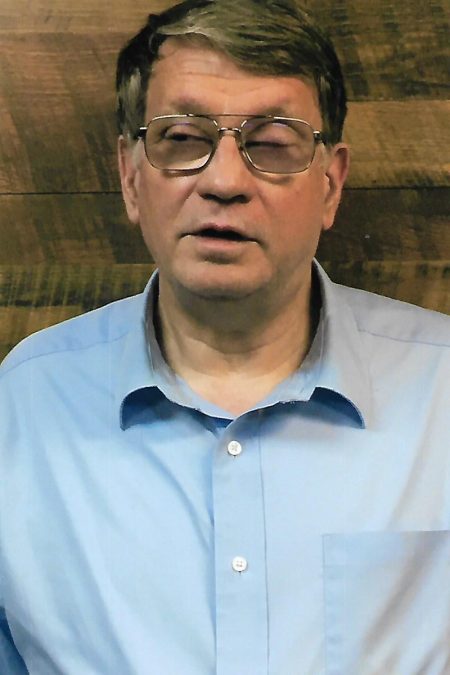 As of January 2022, I became the editor and publisher of the Circle of Love audio magazine for the blind.

I was born in 1959 in northwest Missouri. It was several months later when it was discovered that I had congenital cataracts. They were removed when I was a toddler–much later than they are removed from babies today.

I’ve been blessed with a little usable vision all my life, but for all practical purposes, I’m blind. As someone who is not totally blind but definitely not sighted, I know what it means to walk in two worlds.

My wife Carol and I have been married since April 1983. We have two grown children. Our daughter Melody and her husband Ethan have blessed us with three wonderful grandchildren. We don’t get to see them often because they live 600 miles away. Our son Nathan has a similar eye condition to mine, but he has better vision.

I received Christ as savior and Lord in April 1976 at the age of 16, shortly after I had what would prove to be the first of several eye operations for glaucoma. The family who visited our home then to share the gospel had recently left our church and were attending a Bible believing Baptist church. My parents allowed me to go to church with this family, and that was a real blessing for me as a new believer.

I grew up in southeast Nebraska where I was a student for ten years at the school for the blind in Nebraska City. Since one of my life long interests is radio broadcasting, I attended Grace College of the Bible in Omaha where I graduated in 1982 with a Bachelors degree in Radio Communications and Bible. (Grace closed in 2018.)

In my twenties I was quite active in a national advocacy organization for the blind. The experiences I had and the people I met had a transformational impact on me. At the time I believed I was doing the Lord’s work.

I became familiar with a few ministries to the blind, and I thought the Lord might lead me into such a ministry. It was not meant to be, so I gave up the idea. It would be many years before I came in contact with George Gray and the Circle of Love.

I met Carol in my senior year of Bible college. For a little more than a year after we were married, we lived in Baltimore where I taught typing to blind adults at Blind Industries and Services of Maryland. That wasn’t my cup of tea, so I went to work in radio where my heart was. In the 1980s and 1990s I was a radio announcer at two commercial Christian stations in Pennsylvania and Missouri.

I’ve learned a great deal from two unsuccessful business ventures. One was a small greenhouse produce business in the mid 1990s. The other was a website on preparedness and survival from 2007 to 2017. The website venture taught me skills which have enabled me to maintain websites for our church, the local amateur radio club, a personal blog, and now the Circle of Love.

Carol and I taught our children at home, and I did most of the teaching. That proved to be more fulfilling for me than Christian radio. Our children both went on to graduate from Bible college. Our daughter is now home schooling their children.

Since Spring 2015 Carol and I have been active at Northwood Baptist Church, Columbia, MO, an Independent Baptist church. Carol plays piano. Besides maintaining the website, I operate the sound system, and I’ve been blessed to teach an adult Sunday school class since Fall 2018.

Since August 2017 I’ve been privileged to teach a weekly Bible class by phone for a small group of blind friends. This outreach is not affiliated with our church.

A few years ago I became a subscriber to the Circle of Love magazine. Brother George Gray and I began corresponding and have had many edifying conversations. When he approached me in 2021 about taking the helm of the Circle of Love ministry, I was honored and humbled.

After much prayer and seeking God’s will, the Lord impressed upon me that He has been preparing me for this opportunity, and I had no good excuse for not keeping the ministry going. Brother George has been a caring mentor and coach throughout the transition process.

I look forward to sharing God’s word through the Circle of Love ministry and interacting with our subscribers. I intend to continue publishing the kind of content George Gray has produced faithfully for so many years.

The Circle of Love is available to U.S. subscribers on cartridges designed for audio players made specially for the blind. I plan to make the magazine available online as well, and it is my hope and prayer that this will enhance our outreach.

I covet your prayers as this ministry goes forward. May the Lord’s will be done through the Circle of Love, and may He receive the glory He deserves.